The Jericho Hill was the Crowned Heads fourth regular production release as well as their second release out of the My Father’s factories in Estelí, Nicaragua, following the Las Calaveras.  The Jericho Hill line was inspired by “The Man in Black”, Johnny Cash’s song, “The Cocaine Blues”.

The Willy Lee is a beautiful box press with a deep dark maduro wrapper that has a decent amount of little veins, and some noticeable tooth to it.  The pre light draw was very smooth and had rich tobacco, cocoa, and a hint of spice to it.

Upon lighting, I was immediately impressed with the draw and classic My Father’s spice and pepper.  There was leather, wood, and a sweet molasses notes that I really enjoyed.  The pepper and spice remained on my palate between draws.  The leather and wood really took center stage for the first third of the cigar.  The strength was medium, and the burn and ash were on point as well.

The strength has now begun to pick up.  The flavors really started to evolve.  I have noticed that the pepper and molasses slowed down and cocoa and leather have taken center stage.  I’ve also noticed a slight citrus note.  Still a nice amount of pepper on the retrohale.  The ash has fallen off and the burn needed a minor touch up about halfway. 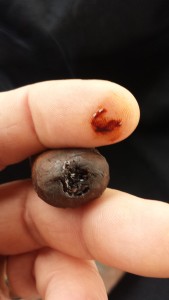 The strength has jumped into full gear, changing from medium to full flavor.  I started to notice some tar bubbling out of the punch cut opening with about 3 inches of the cigar left.  The cigar has now taken on a bitter tar taste.  I tried my best to smoke through it, but had to put it down about a half inch away from the band.  This is very unfortunate.  The other vitolas I have smoked in this line smoked perfect from start to finish.  While this will not change my attitude toward Crowned Heads cigars, this particular one ended early for me.

The whole cigar has amazing transitions in flavor and strength.  However, this one wasn’t what I am used to when I smoke a Jericho Hill.  It was an explosion of great flavors that I enjoy.  I have yet to smoke anything from Crowned Heads that didn’t leave me wanting more in my humidor.  I recommend the 4 pack sampler with all the vitolas of the Jericho Hill line.

This cigar would go well with a stout beer or a good scotch.  I of course paired it with a local craft root beer.

Jericho Hill Willy is a 2 out of 5 pints for this cigar in particular.  The tar issue made a serious impact on the 2 pints score.  Still going to smoke more of these, just maybe not the Willy Lee.