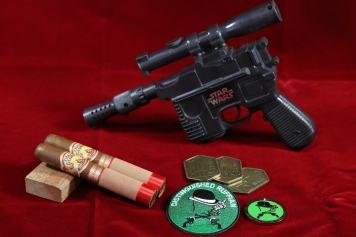 When A.J. Fernandez came up with the idea for Dias de Gloria his idea was to pay homage to an idyllic time he believes were the glory days of Cuban tobacco—preCastro Cuba. While it is a nod to this time period in Cuba’s history, the new cigar contains no Cuban tobacco. It is, however, made up of aged tobacco from four of his oldest farms in Nicaragua: Finca los Cedros, La Providencia 1, La Lilia and La Soledad. All of them located in Estelí.

“These are the four oldest farms I own,” says Fernandez, “and I’ve been setting aside tobacco from each farm and aging it for years for this blend [some for as much as 7 years]. I want everyone to enjoy it like the glory days of old Cuba.”

The look of the cigar is quite nice, the wrapper has a tan leather color with a light oil sheen to it. It has some light veining with tight seams. The body feels well rolled with no discoverable dead spots or areas that give more than anywhere else. The smell from the body is chocolatey with leather and cedar notes. (Not uprising given that 1/3 of the cigar comes wrapped in cedar.) Same notes are noticed from the foot.

The cigar cuts easy using scissors leaving no damage, it lights easily and has a firm draw. From the first few pulls there is a great amount of pepper flavor which subsides relatively quickly to let the other flavors come in.

In the first half has flavors of leather and cedar with the pepper moving in and out. The ash hold tight for about 1/2-3/4 of an inch at a time. It provides a medium amount of light weight smoke, burns sharp and the draw remains firm. Approaching the 2nd half (fine I will say it, in the 2nd 3rd) the pepper starts to fall further to the back and so far over all has been an enjoyable mild flavored smoke.

In the second half the draw begins to loosen up a bit but not in a bad way. The mild nearly buttery flavor continues until approaching the final 3rd of this cigar. In this final 3rd the flavor really begins to pick up, filled with full spice and dark chocolate. The burn is even for the duration of the smoke and no touch up is required. The smoke remains light which creates an intriguing mouth feel when compared to the fullness of flavor.

As a general rule I do not break cigars down by thirds because I personally don’t notice a great deal of flavor changes in the cigar to warrant such a discussion but, Dias de Gloria could easily be broken down this way. The flavors are peppery in the beginning, then mellow to a mild flavor then come back as a powerhouse at the end. When you find this cigar in the shop be sure to add several to your humidor you won’t be disappointed