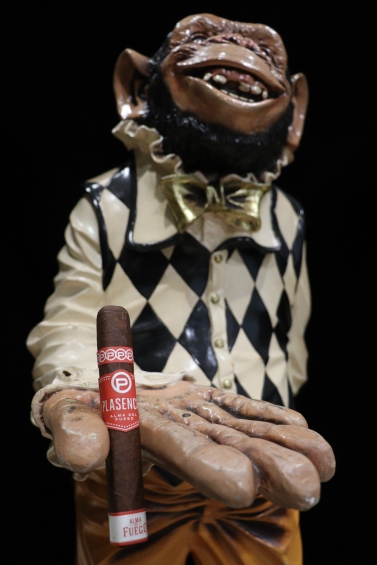 Alma Del Fuego or Soul Of Fire is the third in a line of five Alma themed cigars from Plasencia. Don Eduardo Plasencia began growing tobacco in Cuba in 1865 and has been one of the worlds leading growers ever since.  Continuing this heritage now in Nicaragua they are in their fifth generation of tobacco growing. One such area is the Ometepe island where they began cultivation in the 1990 and is where half of the filler and half of the binder leaves have come from. The reason this is important is that on Ometepe Island there are two volcanoes which have created very rare and special soil conditions leading to a great place to grow tobacco. These leave used have been aged for seven years prior to being rolled.

This boxed pressed cigar is covered in a dark brown wrapper that has a touch of mottling. There is a noticeable oily sheen to it along with thin but visible veining and the seams are tight and well hidden. It feels dense and well rolled and has just that little bit of give between the wrapper and body that a pressed cigar should have. There are odors of wet earth and leather from the body and foot and the pre-light draw is easy and has the flavors of dried tea leaves and cinnamon.

In the first half there are lots of earth notes with spicy finish. Smoke production was plentiful and medium in weight. The burn stays straight and requires no touch ups..

Moving into the second half a predominately woody flavor takes over with more of a nutty finish however the spice remains as well. Normally I don’t normal discus retrohale as I do not find a lot of new flavors and some people don’t use this technique however, in this cigar this is where I find some citrus notes so it’s worth noting. Smoke production continues to be the same and the burn never wavers.

There was never a shortage of flavor with this cigar and it truly does show the difference that well aged tobacco from Ometepe can give. Medium full in strength it makes for a great way to start your day or a nice stick to pair with a bourbon or rye in the evening with your friends.  While the price point might make you want to save these for more special occasions there should definitely be a few in your humidor at all times

Wrapper: Nicaraguan Sun-Grown
Binder: Nicaraguan
Filler: Nicaraguan
Price: Around $13.00 – $15.00 a stick depending on vitola.
Website: Plasenciacigars.com
Rating: 4.7 out of 5 pints