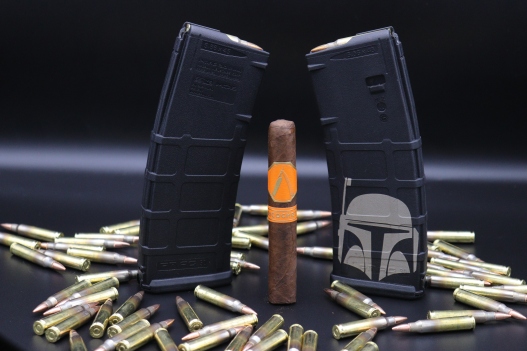 La Barba Ricochet has been on my radar for a while now and it was time to write about it. Inspired by Toy Bellatto’s love of wine it was originally called Primitivo which, if you didn’t know, is a type of grape used for making a red wine of the same name. Tony, the Co-Founder of La Barba, had this to say about the blending process for this cigar. “I was trained professionally in wine and spirits, I wanted to bring that to the table here more than I had with anything before. As a WSET level 3 sommelier, the goal with this new offering was to incorporate that palate and experience, even down to the name itself: Primitivo. The name is rooted in the ancient history of wine itself, and shares flavor notes with the profile for the cigar as well.”

(The name change from Primitivo to Ricochet came about right before its release in October 2018 due to various trademark conflicts.)

The Mexican San Andres wrapper is a soft natural brown shade with small streaks of dark mottling and a soft velvet finish to it. There are a few veins and a slight tooth to it as well. The seams are tight and well hidden. The cigar feels full but slightly lumpy giving it a unique feel between the fingers.

The smell from the body reminds me of fresh cut wood and earth. From the foot I get the same odors but also a bit of graham cracker or perhaps better to describe it as a cream. Theres just something smooth about the scent from this cigar. From the cold draw I get my usual unsweet tea and tobacco notes with a touch of fruit, something similar to plum or possible grape. The grape could be psychological given that I know the thought process behind the blending.

The first half of the La Barba Ricochet offers pepper. Lots and lots of pepper but with an interesting creaminess to it. A light citrus can be found on the retrohale that is worth attempting if you don’t normally do this. The finish is long and dances on the pallet giving plenty of other flavors that I could spend most of the day describing but I let you find and describe those for yourself. It burns quite even and produces plenty of smoke that has a nice weight on the tongue.

For the second half the cigar begins to offer up the same pepper and cream flavors but with chocolate joining the mix. Towards the very end there is a dark roasted coffee flavor that comes in to round out the flavors. The burn continues to stay sharp and the smoke production is relentless.

During the entire smoke there was never a portion that I didn’t enjoy. The flavors mixed with leather other to make a robust but smooth cigar. As a robust and full bodied cigar this is one you won’t want to miss out on. With its bright orange band it will jump off the shelves at you and when it does be sure to catch a handful or two of them.