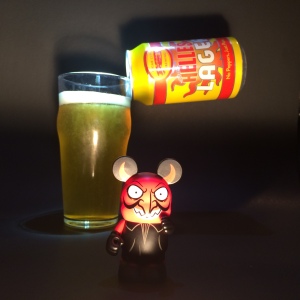 Cigar City Brewing’s “hotter Than Helles Lager” is part of their year round beer selection. I had been interested in trying it for a while now and decided to pick some up last week. I wasn’t sure what to expect out of it since lagers tend to be rather uneventful and quite honestly, boring. What I found was a beer that was neither of these things.

While the word “hell” is a German adjective meaning “light”, “blonde”, “pale”, etc., the word “helles” is a noun meaning “bright” or “a light one”. Given the color of the beer this is a very apt name for it. The color is very light, I would describe it as pale blonde. There is a lighter than normal carbonation to this beer which makes it even easier to drink leaving almost no head after pouring. The lower carbonation does inhibit foam though so expect no real lacing on the glass.

Cigar City Brewing describes the smell as grain, hay and honey, however, in addition, I also notice elements of fresh cut grass and a fair amount of sour lemon.

The flavor is fresh and light. The lower carbonation comes into play again creating a very light mouthfeel to the beer. Quoting Cigar City again they describe the taste as having a malty backbone with hay and honey. I did find that there is a good amount of bready malt flavors but they were offset by a decent amount of hops giving it quite a bit of bitter citrus flavor with a clean enjoyable finish.

With all the boring lagers out there it was nice to have one that at least had some complexity to it. I’m not saying this is going to replace any full-bodied beers you enjoy drinking but for a lager it’s a good. If you’re looking for something to drink on a hot day or something light and refreshing while mowing the lawn (cheers for that Ryan) this is your beer.