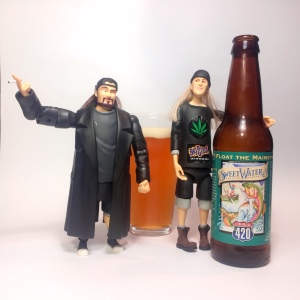 While Sweet Water’s 420 Extra Pale Ale’s name first conjures images of those like Jay and Silent Bob, it gets its name from the day it was brewed. Originally created on April 20th 1997 it gets it’s amusing title.

Since 420 Extra Pale Ale is part of Sweet Water’s year round selection and their most popular so I picked up a sixer at the local liquor store and give it a try. It poured nicely with about two fingers worth of head at the end. There was an average amount of carbonation so the head vanished rather quickly. Do to the average carbonation the lacing on the glass was apparent but still minimal.

The color was a light gold to strawberry blonde. It has a full aroma of hops with hints of jasmine and a light citrus odor. The taste is light and clean, with the hops at the front and a bitter finish. Hidden in the mix is a light floral flavor, citrus and the taste of cut grass. Sweet Water describes it as “A tasty West Coast Style Pale Ale with a stimulating hop character and a crisp finish.”

There’s no shortage of Pale Ales out there and with most of them having no noticeable difference between them, it is nice to find one that has a fuller flavor to it. 420 would go nicely with most any activity and most foods. If you haven’t tried this beer yet I recommend giving it a try.