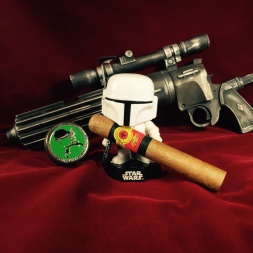 I’ve never been a big fan of Montecristio in general, nothing about their quality or construction because it’s always been tiptop, I just tend to like a different pallet of flavors then they have offered. The Relentless was made exclusively for Famous Smoke Shop in PA. and I decided to give it a go. Even though I had I have had these previous experiences I kept an open mind when trying the Relentless.

At first look the cigar is well constructed with tight seams, minimal veining and a clean triple cap. While feeling along the body it is spongy and giving with light resistance, no apparent bulges and only one small spot that could have been filled a little better but this was minimal and confined to only one of the three I smoked. (Side note: Even with this small “dead spot” it did not affect the way the cigar smoked or burned.)

The overall smell was the usual leather and cedar notes that are to be expected from any well kept cigar but traces of dried fruit and a light brew coffee were also present and from the foot a sugar and spice or almost cinnamon toast aroma could be noticed.

The cap cut clean and caused no harm to the construction of the cigar and the light was easily done with one match. The burn started even and the draw was easy but not loose. It provided a pleasant amount of smoke that was medium bodied with a slight grittiness on the tongue.

The 1st third of the cigar had a mild fresh baked bread and hay flavor, a bit lighter of a taste than I prefer but enjoyable non the less. The burn stayed even, the ash was tight, light grey in color and held to stick without signs of wanting to fall off.

In the 2nd third the flavor began to change and it became slightly bitter with a complex multi flavor of black coffee and roasted nuts with the fresh bread flavor lingering in the background. It still has a constant even burn and the ash held on until I tapped it off at around 1.5” 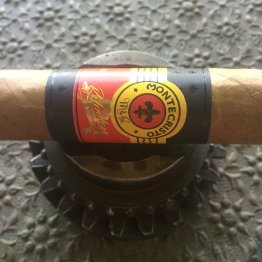 In the final third the flavors mellow out and the coffee becomes more subdued and a pepper and spice taste take over with a surprising touch of cinnamon on the finish. The burn remained even throughout the entire smoke and the changing flavors made this an enjoyable smoke.

If your looking for a good light to medium body cigar this is the one for you. If you like heavier flavor cigars I would recommend this as a morning or early afternoon smoke. It would also be a good choice for new smokers since it wouldn’t be overwhelming in flavor but would give the opportunity to experience how a cigar changes as you smoke it. It could also be a great stick for the golf course with it’s nearly two hour smoke time. Take I trip over to Famous Smoke and pick some up!