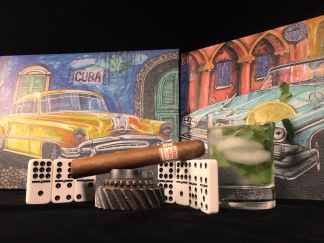 Knowing that Willy Herrera was making this cigar and it was being made in a more traditional Cuban style I was excited to try it. I did a little bit of investigating before the package arrived to know what I would be getting into. All of the Herrera Estelis are rolled in the entubado style with a triple cap. This is the bunching technique, which rolls each filler leaf into itself, almost like a small scroll. Each individually “scrolled” leaf is then placed together to form the bunch. This skillful rolling technique creates a more firmly packed cigar, which allows air to travel between all of the leaves, carrying more aromatics/flavors to the palate. Entubado rolling is the most difficult and complex bunching method and is therefore rarely employed in large-scale manufacturing. (Thank you T.U. for providing a well-explained definition). After having several of these this is what I found.

The cigar is covered in an Ecuadorian wrapper that is light milk chocolate in color. The veining is minimal and the seams are tight and is toped off with a classic Cuban style simple band. The over all feel of the body is giving to the touch but obviously well constructed with no noticeable dead spots. The smell from the body is mild and is bread like with notes of coffee. From the foot it is a bit stringer and has the smells of licorice, aged leather and sugared ginger.

The cap cut easily and with no distress to the construction. Lighting was easily done with two matches and the initial draws provided good amounts of medium weighted smoke. The first third of the cigar burned evenly with the ash holding tight for up to almost an inch before asking to be knocked off. The flavor is a little sweet with a bit of pepper as well as the ginger on the back end.

The second third becomes a bit heavier with the flavor getting stronger. The sweetness begins to dissipate while the pepper and spice remains. The burn continues to be even and construction appears flawless at this point.

The last third stays close to the second third in flavor with just a bit more of the spice notes. The sweetness makes a small reappearance but is quickly gone again and covered by the spice along with a small amount of coffee flavor. The burn stayed consistent throughout the whole smoke as well as no faults in construction could be found.

Along with most items from Drew Estate I would recommend this cigar to anyone looking for a fuller bodied smoke. The build of this cigar is solid and hard to find in any other cigar available to the American market right now and the effort is clearly recognizable when smoking. Go grab a couple a let me know what you think.

On a side note Famous Smoke Shop has started a new cigar and spirits online pairing guide. Go check it out at https://www.famous-smoke.com/cigar-pairing/