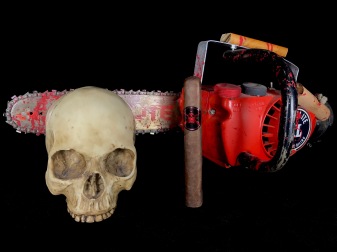 Being fairly involved in social media it was hard not to notice the serge in Traficante sticks being passed around and quite a lot of them through our club members. Finally curiosity got to me and I checked out their website. I liked their stance on how they operate and their idea of building camaraderie in the industry aligned with our philosophy so of course I placed an order. Some of the prices are slightly above average but from a vendor who produces less than 1,000 sticks a day the prices are justifiable.

For my first smoking experience with Traficante I chose their box pressed Suicide King. It comes in one size, a 6×50 Toro. The wrapper is a rich dark espresso color, is fairly smooth with some veining. The cigar feels spongy to the touch but the rolling is consistent all the way though with no dead spots. The pre-light draw is easy which goes with the soft feel of the roll. Even though it feels soft and the pre-light draw is easy the construction is solid and it is a well crafted cigar.

It lights easily with no issues and seems to burn well. The flavor is rich and earthy with a lasting finish. Smoke production is full but feels light. Even though it has an easy draw to it the cigar does not burn hot or fast. This held up until just past the first third of the cigar.

Just past the first third the burn line became A bit uneven and an inspection of the foot showed a bit of tunneling. This began to worry me but I hit the uneven burn with my torch to bring it up to speed and carried on. After about 1/4 – 1/2 an inch more the burning kept even and the tunneling disappeared. (Side note: This has not happened again with either the second one of these or others from their line that I have since smoked. We’ll chalk this up to a one time occurrence.) 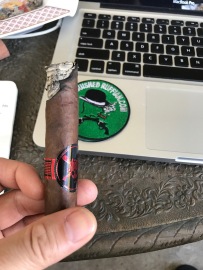 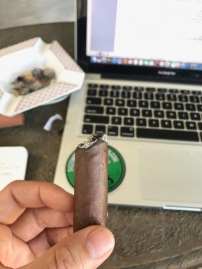 The flavor profile stayed consistent throughout the cigar with a bit of nuttiness being more apparent towards the final third. The cigar burned with no issues for the remainder of the smoke and had a tight greyish ash that held on for a good inch or so before knocking it off.

For my first go around with a company I was pleased with the taste and overall construction of the cigar. While there was that moment of uncertainty I was glad to see that it was just a minor hiccup and I’m sure that the other cigars I purchased from them for reviewing will not have this issue. If your looking for a break from your everyday cigars I suggest giving Traficante a try you won’t be disappointed.