As someone who drinks bourbon on a daily basis the idea of the Pappy Van Winkle Tradition cigar was an exciting event for me. Whether it had anything to do with the whiskey itself really didn’t matter it was the idea that a blend had been made for us whiskey drinkers and gotten the seal of approval from Julian Van Winkle himself. I might have been a little over zealous in texting photos to everyone I knew once I got them using the unicorn emoji and #bejealous but like I said I was excided. (What can I say, my friends and I are all immature.)

Willy Herrera made this particular blend during his tour of the Drew Estate factory in Nicaragua while deciding to join the Drew Estate team. Several other blends where given to Julian to sample and ultimately this was the one he found himself going back to and like that the Tradition was born. Now that we have the quick history behind it, on to the important stuff.

Construction of the cigar is solid as is the case with pretty much anything you get from Drew Estate. The seams on the wrapper are tight and even and the feel of the cigar throughout the body is full with no dead spots. The wrapper itself has very minimal veining giving it a smooth complexion. The color is a light roasted coffee bean with a just a hint of the oily sheen you’d expect from an Oscuro. The feel of the cigar is full but yielding to pressure between the fingers

The smell from the body is woodsy and semi-sweet. From the foot there is the distinct smell of raisins, leather and, perhaps it’s my imagination because of the excitement but bourbon as well. I choose a straight cut for this cigar and the cap comes off easily and has no effect on the integrity of the cigar. The pre-light draw is firm but not to the point that you feel you’re fighting with it. The pre-light flavor is that of fresh brewed tea and hay. 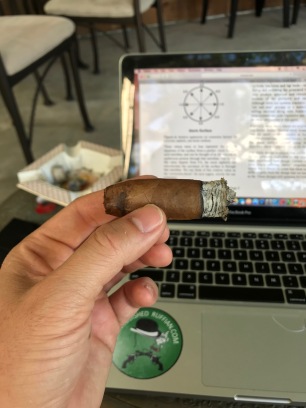 It lights easily and burns evenly as it starts with mild resistance on the draw. The cigar produced plenty of smoke that had a light mouth feel and had a nice sweet scent. The initial flavors to me were spice and pepper with a citrus finish but remained mellow making this an easy to smoke cigar and paired well bourbon. This flavor carries on for the first half of the stick.

The second half of the smoke shows the peppery flavor becoming slightly more prominent with the taste of fresh bread and hints of leather nudging its way on to the pallet. The ash was light grey and held tightly for the duration of the smoke, only falling off when requested. The burn stayed consistent and even through the duration of the cigar.

The overall construction of this cigar was top notch and the Belicoso size was perfect for me. The flavors were fantastic and were blended to the point that none of the flavors were overpowering but mingle together to as a great smoke. This made for a rich, complex smoke that you could either pay attention to all of the subtle nuances or just sit back and relax and enjoy. Not surprisingly this cigar paired very well with bourbon but could easily be enjoyed with coffee or sparkling water. If you happen to come across these pick up whatever you can because you will not be disappointed.