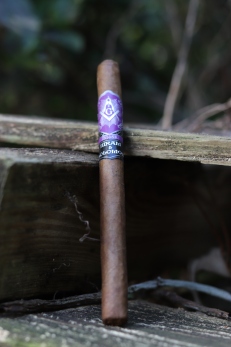 Hiram and Solomon popped up on my radar a couple years ago when I was looking for a smoke in a not so pleasant downtown cigar shop and I spotted their band. Since at the time it was something new to me I picked up a few sticks and gave them a try. Turned out they were pretty good and next time I was back downtown I went into the same shop to get some more and for some reason they had stopped carrying them. Bummed I left the store empty handed and started looking elsewhere, and of course it didn’t take long to find them. Recently I ran into Fouad, George and their rep Heather (who just happens to also be a DR Member) in town and as we were talking the conversation lead to the new Traveling Man lancero that is being released. After smoking one with them I knew I wanted to write about it so I brought a couple more back to try and this is what I found.

Construction wise, it doesn’t have that traditional rigid nearly hard feeling that most lanceros have, this has a bit of give to it. The wrapper has a lovey milk chocolate color to it with a nice velvet sheen and there is very minimal veining. The seams are tight and there are no areas that fill unfilled. The smell from the body and the foot reminds me of smoked foods and hay. The cap cuts off easily and with no damage to the cigar, pre-light flavor has a slight sweetness on the tongue along with rich tobacco flavors. The draw is easy and offers little resistance. It lights easily and burns evenly. For a lancero it produces plenty of medium weighted smoke with a bread like consistency. The initial flavor is mild but well balanced.

The first half is slightly sweet and creamy with a bit of barnyard notes. There is a hint of pepper hidden in the finish but is not very noticeable. The smoke production for this cigar is fantastic giving large amounts of the same medium weight smoke noticed from the initial light. While the ash does drop off fairly easily the burn is even.

Once reaching the second half of the cigar the sweet and creamy taste remains but now the pepper flavor is more apparent along with other spices and a light woodsy taste. The burn continues to be razor sharp and the smoke is full. At no time did I need to touch up or re-light this cigar.

This really did end up being a great cigar. Hiram and Solomon describe it as being a “medium body blend that is masterfully encased in a silky Sumatran wrapper from the island of Indonsia. The thick smoke is rich in aroma with a hint of spice and coffee on the palate. The Finish is soft and subtle as a creamy texture melds with notes of cocoa leather.” While I enjoy most things from Hiram and Solomon this one has become a quick go to for me. It has a great construction, great flavor and a great burn time. If you haven’t had a chance to try their line yet I would recommend starting with the Traveling Man lancero, its strong enough for someone that likes a fuller body but the creaminess of it makes it feel light enough for everyone.