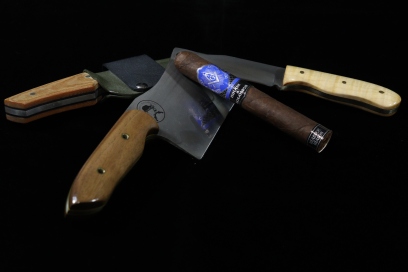 Hiram and Solomon is a line that was created by Freemason brothers Fouad Kashouty and Brother George Dakrat. The idea came from there thought that there was no accessible cigar on the market for Freemason smokers that carried the square and compass, nor any other Masonic Emblem. From that point they began working on the possibility of creating not only a Masonic-themed cigar, but a quality cigar that would not just physically represent Freemasons all over the world but contain within it a quality that could match the caliber of excellence that the Brethren themselves contain. From this diligent work the Hiram and Solomon line came to be. Additionally, being one of the most fundamental aspects of Freemason Teachings, a way to incorporate charity into such a meaningful company was a must. In order to have the opportunity to give back to their supporters, Hiram & Solomon Cigars donates part of the sales profits to various Masonic and non-Masonic community charity events.

I’ve had these Master Mason cigars resting for several months, not because I didn’t want to smoke them but because of the size. The Grand Toro weighs in at a hefty 6 x 60 and I knew I was going to need more than my usual 45-60 minutes to smoke. I finally had a day with some extra time and knew exactly which cigar to pick.

The cigar is covered in  a rich dark maduro wrapper, nearly black in color. There is some veining but not excessive or abnormal for this type of wrapper. It has a soft, velvety finish to it. Pressing along the body the cigar feels full with no noticeable dead spots. The smell is sweet, like chocolate or fresh baked cake. The same can be noticed from the foot. The cap cuts easily and does not damage the construction. The cold draw has sweetness to it that matches the odor along with full tobacco.

The first half has flavors of toasted nuts and the sweet smell translates to the flavor as well. It produces a fair amount of smoke that has a good weight to it. The weight of the smoke combined with the flavor makes for an enjoyable first half. The cigar burns easy and sharp while the ash holds for about 1/2 inch at a time.

In the second half the flavor really picks up, it changes from being a medium bodied cigar to very full. The taste of dark black coffee and tobacco take over along with a hint of cinnamon in the finish. Theres also a touch of meatiness to it as well. This flavor continues until the end resulting in a powerhouse of a cigar with one heck of a nicotine punch to it. There was no issue with construction throughout the smoking session, it continued to provide ample smoke that always had a sweet aroma to it.

While this is not my normal go to size for cigars it was definitely worth putting aside the extra time to enjoy. In whole the cigar was great and looking forward to having a few more of these. With a construction of this quality and flavor this rich I would recommend picking up these when you see them in the shop. If your shop doesn’t have them ask them to bring them in. You can also read about the Hiram and Solomon Traveling Man Lancero by clicking here.