MICHAEL GIANNINI TO HOST ROLLING EVENT AT THIS YEAR’S FESTIVITIES

August 2019 – Bringing their signature unconventional approach to their cigars, Ventura Cigar Company will be hosting a cigar rolling event at this year’s Rocky Mountain Cigar Festival. Held on August 24, 2019 in Broomfield, Colorado, the Rocky Mountain Cigar festival brings together aficionados of spirits, cigars, wines, and food, with a full day of sampling, music, games, and activities. It’s an ideal setting for Ventura Cigar Company to showcase products with attendees, but they’ve decided to take it to the next level by holding a rolling event to share the craft behind their blends. Led by Michael Giannini, industry icon and General Manager for Ventura Cigar Company, the rolling event is expected to draw several hundred people, offering a hands-on approach to cigars.

Guests of the rolling event will be treated to a VIP experience, as they roll their own Axis Mundi cigars, a popular blend from Ventura Cigar Company’s popular Archetype brand.

“Sometimes, to really appreciate the experience, you have to get your hands dirty,” says Giannini. “It’s not enough to simply smoke a cigar. To really savor it, really understand it, you have to know the backstory. We’re giving people a chance to be part of the backstory. To roll the cigar themselves, engage in the process of creation, and then truly enjoy the smoke. It’s going to be great, and I’m excited to be a part of it.”

To find out how to reserve a spot at Michael Giannini’s Rolling Event, please visit https://rmcigarfestival.com/tickets/. For more information about Ventura Cigar Company events, or any of our cigars, please visit venturacigar.com.

June 2019 – “Hide not your talents. They for use were made. What’s a sundial in the shade?” (Benjamin Franklin)

Benjamin “Benji” Menendez and Manuel “Manolo” Quesada: two of the greatest of all time. Cigar industry pioneers, builders, blenders, visionaries, creators, and friends. True legends of the business, Menendez and Quesada are teaming up for the first time in an exciting new passion project from Michael Giannini and Ventura Cigar Company (VCC). Led by their longtime friend, Giannini, Menendez and Quesada have each collaborated on a namesake blend for Cuban Cigar Factory. A celebration of tradition and talent, this collaboration for Ventura Cigar Company’s Cuban Cigar Factory is bringing the importance of Old-World Cuban expat expertise to the palates of the present and generations to come.

Benji Menendez enjoyed an early beginning in the Cuban tobacco business at his father’s factory. Forced to leave his home and livelihood when Castro came to power, Menendez had to start completely over. However, as a seeker of opportunity and a purveyor of fine tobacco, he soon established a new

foothold, becoming a mastermind behind cigars and factories in nearly every cigar-making country. His career has been legendary, working in 8 different countries to produce some of the best cigars to hit the market.

“I still think about the cigar factory every day of my life,” says Benji Menendez.

The Benji Menendez for Cuban Cigar Factory: available in a Robusto, Toro, and Belicoso, a rich, silky smooth blend featuring a Dominican binder, Dominican and Nicaraguan fillers, and a Connecticut Ecuadorian wrapper.

Manolo Quesada is a fourth-generation master from a lineage of tobacco growers, brokers, and blenders that stretch back over a century. His career began in pre-Castro Cuba, where he first developed a taste for the intricacies of tobacco at his father’s company. Also forced to leave Cuba by Castro’s rise to power, Quesada went to the Dominican Republic, where he founded MATASA in 1972, from the humble beginnings of a chair, a phone, three rollers, and $100. Over the decades, MATASA has flourished under Quesada’s intuitive, expert eye for quality and flavor, making his knowledge for the past and present a natural fit for the Cuban Cigar Factory project.

The Manolo Quesada for Cuban Cigar Factory: available in a Robusto, Toro, and Belicoso, a rich and savory blend featuring an Ecuadorian binder, Dominican fillers, and a Habano Ecuador wrapper.

“I feel like I’m a Rick Rubin of the cigar industry,” says Michael Giannini, General Manager at Ventura Cigar. “I’m bringing people together- people who I admire, my great friends who laid the foundation of the cigar industry, and people of the next generation. The creators and the consumers. Everyone has something to offer. We have a duty to engage this talent, not to let these great minds and their priceless knowledge fade away. They’re now our mentors, an inspiration to us all, and they’re still here. They’re still on the court, so let’s play ball. Let’s show everyone what we can do.”

Both Cuban Cigar Factory cigars are created at the MATASA factory in the Dominican Republic, in collaboration with Ventura Cigar Company. They are set to debut at IPCPR 2019, and are planned for a late summer ship date. The Benji Menendez and Manolo Quesada blends will each be available as follows: 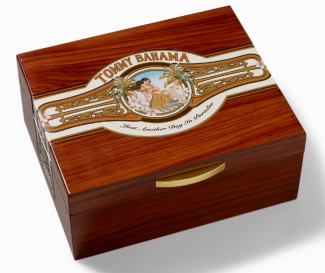 Anchoring the new collection is the limited release Hula Paradise “Just Another Day in Paradise” Humidor- a striking mahogany wood humidor with a three-dimensional metal inlay that wraps around its top three sides, and is reminiscent of a premium cigar band. It also features a Tommy Bahama Hula Girl strumming a ukulele within the center of the artwork. The humidor is both a conversation-piece and a storage necessity, storing up to 50 cigars and including internal humidification and a hygrometer. The MSRP is $175.

“This new collection has such a great vibe,” says Michael Giannini, General Manager for Ventura Cigars. “It brings the party to the gathering and inspires people to slow down and make time to enjoy the good life. Which, of course, includes a cigar or two. Come by our booth at IPCPR and check it all out.”

owned subsidiaries of Kretek International. Tommy Bahama Luxury Cigar Accessories will be displayed and available for purchase in the Ventura Cigar Company booth (Booth #818) at this year’s IPCPR show.

For more information on the collection, or any other products in the Ventura Cigar Company portfolio, please visit venturacigar.com or send email inquiries to webinfo@venturacigar.com.